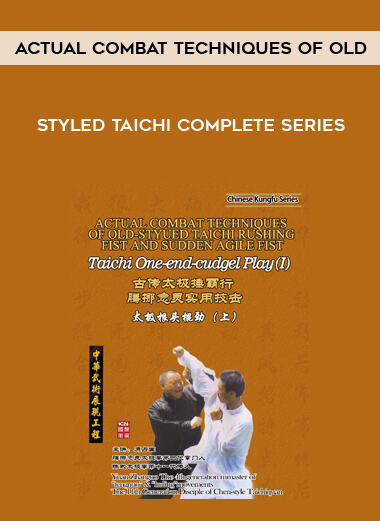 It is really hard to get  authentic advices on martial application of Tai Chi, most of the existing sources are influenced by other styles or providing very limited elements after tons of Taolu forms….
Me I like this  Yuan Z. Guo, a bit rough on the video, but who is really tender when it’s time for fighting but this guy gives us the right ideas to keep in mind when we talk about ppractical fighting from Taichi moves.
Circle theory , trinagle theory are OK, sure that’s not getting us  to the full  Geometry course but… for  the immediate power application this could be useful, maybe even more than the very known silk reeling story!!!
Can you really explose with? I don’t know but the few joint locking ideas explained are very interesting. These ripped DVDs are my inspiration now… Just my own experience.

I am not a Chen style fan but this collection really surprised me by the direct and full explanations contained for anyone looking to grab some fighting skills from Tai Chi, here we are not focused on “relax”, “Dantian movement”, nor “Silk Reeling”… though it does talk about circling but combat is obviously the central idea which all Taichi moves expressed in this collectiong.
And hey… you’ll understand too why (traditional) Chinese experts can be cunny when they  use unorthodox fighting Taichi tricks to control and defeat more powerful opponents.
If not your tea cup,  just continue with your slow moves or even purely standing until the day you’ll be in real fighting situation than… maybe you’ll think that these explanations would avoid

Everything Else, Internet Marketing Courses